At the beginning of 2018, the stock market crumbled. It soon began to recover throughout the year only to plunge again in Q4 like a lead balloon. Of course, this season left many investors with an unpleasant feeling behind, who were desperately searching for a scapegoat to pass the buck to. Psychology calls this mental phenomenon a cognitive dissonance, meaning that people, after they have made a wrongful decision, are actively looking for general excuses, which are, of course, out of their liability; especially in cases where their choice was proven to be wrong in the aftermath. The goat in this situation is called Volatility, which was branded as one of the main reasons to explain why portfolios did not perform as desired. “The year was very volatile. Therefore, we did not perform so well in 2018!” Dissonance resolved.

Of course, we have to be the killjoy and twist the knife:

Many investors considered 2018 to be a volatile year with massive swings to the downside. However, looking at the historical data provides a contrasting view when you look at standard deviations and average down days between 2007 and 2018.

ROLLING IN THE DEEP

Most people, in contrast, invest at different points in time during a year and not on January 1st, rendering the rolling average a better representation of portfolio returns than the year-round performance. 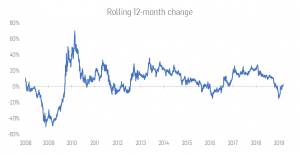 The graph shows that rolling 12-month returns remained positive throughout the entire year and only turned negative in December. During that time of the year, investment managers report their performance publicly. This disclosure obligation can lead to a false perception of downside performance.

Again, we can find evidence in social-psychology on why many investors revealed clouded reasoning through overweighting of volatility. The prospect theory by Kahneman and Tversky illustrates an S-shaped utility function for investors, which is steeper for losses, resulting in overweight of negative incidents compared to positive ones.[1] Looking at daily swings shows that they occurred less frequently, but in larger portions, leading to a higher perceived loss. Therefore, as described in the prospect theory, the perceived gain of a one percentage point’s increase is smaller than the perceived loss of the same movement downwards.

Kahneman and Tversky also discussed the anchoring bias in their popular paper on the prospect theory.[1] According to the anchoring bias, humans use an initial value as an anchor when making decisions and assess incoming information based on the anchor. Therefore, people make decisions on a relative and not absolute basis.

In financial markets, the previous year is used as an anchor. Performances, for example, are compared on an annual or year-to-date basis. The media amplifies this tendency, too. Thus, if we look at annual differences in returns, we may be able to identify the factors that led to the inaccurate overestimation of volatility in 2018.

AN APOLOGIA FOR VOLATILITY