Hydrogen at a Tipping Point: Unlimited Source of Clean Energy?

Hydrogen – a Clean Energy Carrier with the Tailwind from Policy Makers

Hydrogen is the most plentiful element in the entire universe. It does not exist naturally in a pure form but needs to be separated from other elements. It will likely play a major role in the fight against climate change, and the momentum in hydrogen has been building up in recent years.

The amount and scope of projects in the field of clean hydrogen are increasing, and companies, policy makers, as well as regulators are raising their investments and attention. One example of this trend is the EU Green Deal, which implies ambitious growth targets for the use of clean hydrogen over the next decade.1 However, the costs of a large-scale usage of hydrogen are uncertain, and potential investors or companies may be discouraged by high entry barriers. To overcome this challenge, and to come to a point at which technological advancements will have brought costs down sufficiently to attract private investments, governmental and public investments will likely be necessary. In this respect, there are similarities to the rise in wide-spread use of renewable energy sources like solar or wind. Alongside high subsidies, the costs of such renewable energy production have decreased sufficiently to allow their cost-efficient deployment. Similarly, governmental and fiscal support for the development of hydrogen technology may support, in particular, the important early days of its potential predominant use across several industries.

To extract hydrogen from water, energy is needed. If this energy is generated via renewable sources, the term “renewable hydrogen” is often used. Hydrogen in itself can be seen as an energy carrier, and, in this case, as a carrier of renewable energy. After having produced energy with renewable sources, the energy must be used, stored, or transported, and hydrogen can play a major role for the storage or transport. When renewable hydrogen is used for combustion, its only emission is water. The European Commission aims at creating 40GW of capacity in renewable hydrogen electrolysers over the next decade. The production of renewable hydrogen shall reach ten million tonnes in the EU by then.2 These targets, which are planned to be reached by prioritizing solar and wind energy, appear necessary to fulfill the goals of the Paris Agreement. Hydrogen is expected to be one of the major energy carriers. According to the EU Commission, cumulated investments in renewable hydrogen could reach between 180 and 470 billion EUR by 2050.2 It is estimated that, by then, renewable hydrogen will match around one fourth of the global energy demand, with an annual revenue of around EUR 630 billion.2

To achieve such ambitious objectives – not only in Europe but also in other regions – high investments and subsidies will be essential. Renewable hydrogen’s costs are crucial in this respect, as estimates imply that costs of renewable hydrogen are in the range of 2.5-5.5 EUR per kg. Fossil-based hydrogen’s costs are around 1.5 EUR per kg. Thus, clean hydrogen is not yet cost-competitive.2

The good news is that the costs to produce clean hydrogen are already decreasing all along the value chain. Given economies of scale and potentially also of scope, costs are likely to be reduced significantly over the next decade. On top of process optimization and technological advancements, costs for renewable energy production are presumably dropping further. Hence, an uptrend in production of clean hydrogen is expected for years to come.3 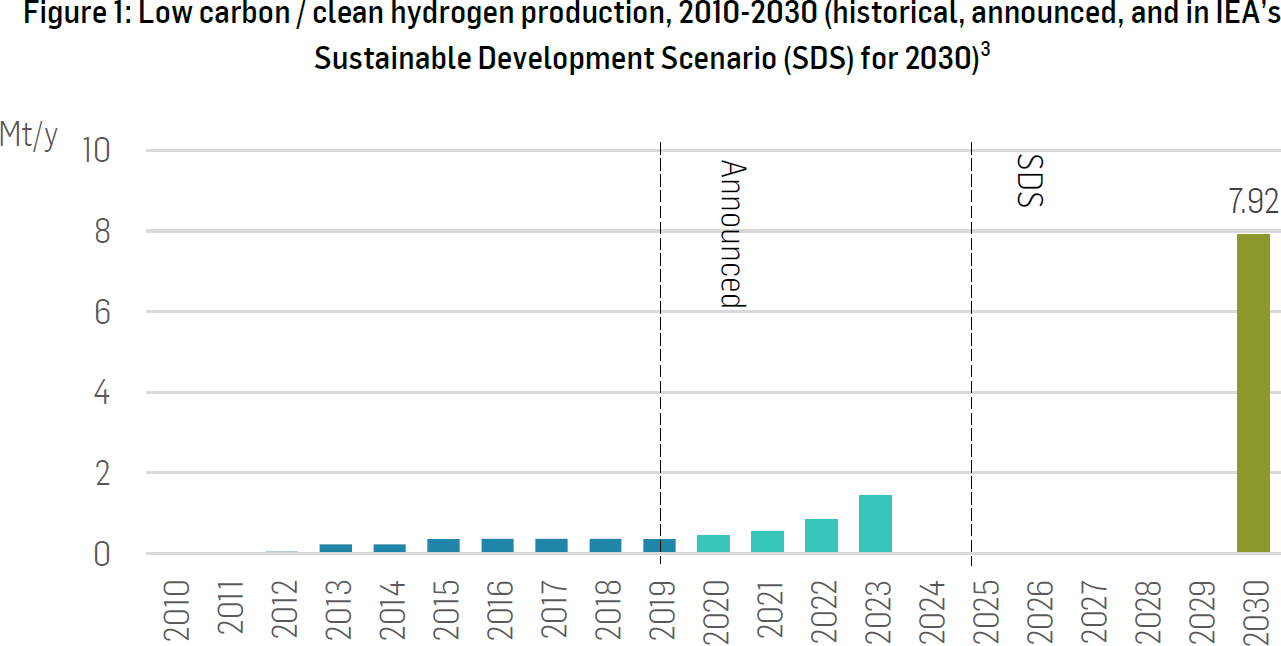 The manifold applications of hydrogen create opportunities to reduce carbon emissions across many industries. Carbon emission reduction through the usage of hydrogen is especially key in energy-intense industries, in which a transition to alternative energy sources is difficult. Some examples of these industries are shipping, long-distance transport, heavy-duty transport, steel, or long-term power storage. One advantage of hydrogen is that it is a carbon-free energy carrier. If efficiency increases, it could be used to transport (renewable) energy or to store energy at reasonable costs. Therefore, plenty of interesting investment opportunities could arise from advancements in the hydrogen economy.

Our Solactive Hydrogen Index Universe is comprised of a narrow set of companies which could play a major role in the evolution of this clean energy carrier. Despite high expectations, the hydrogen industry poses several challenges for companies. Barriers of entry are quite high, as high initial investments are crucial. Further, the green or clean hydrogen – where the focus will be in the near future – is still relatively expensive to produce. Although the hydrogen economy seems to be at a tipping point, many uncertainties remain. Consequently, there are only a few so-called “pure play” companies, and many of the industry’s developments are being done by the big players, since they have deeper pockets to bear entry costs as well as R&D expenditures .

Overrepresented industry groups in our index universe are electrical products, industrial machinery, as well as motor vehicles. Seven out of 30 companies are from the broader field of electronics, which entail the most “pure play” hydrogen companies in our universe. Five companies are active in the car industry, either as car manufacturers or parts producers. Further four firms operate in the trucks, construction, or farm machinery business. Given this large range of different industry groups, the index universe seems relatively well diversified.

Examples of index constituents are the following (performance numbers in USD terms between January-10, 2020 until January-11, 2021):

The recent stock price performance of the above-mentioned companies is very good, especially that of “pure plays”. It appears that companies active in the hydrogen economy are already benefitting from the observed increase in demand for hydrogen, as well as from the industry’s expected growth. 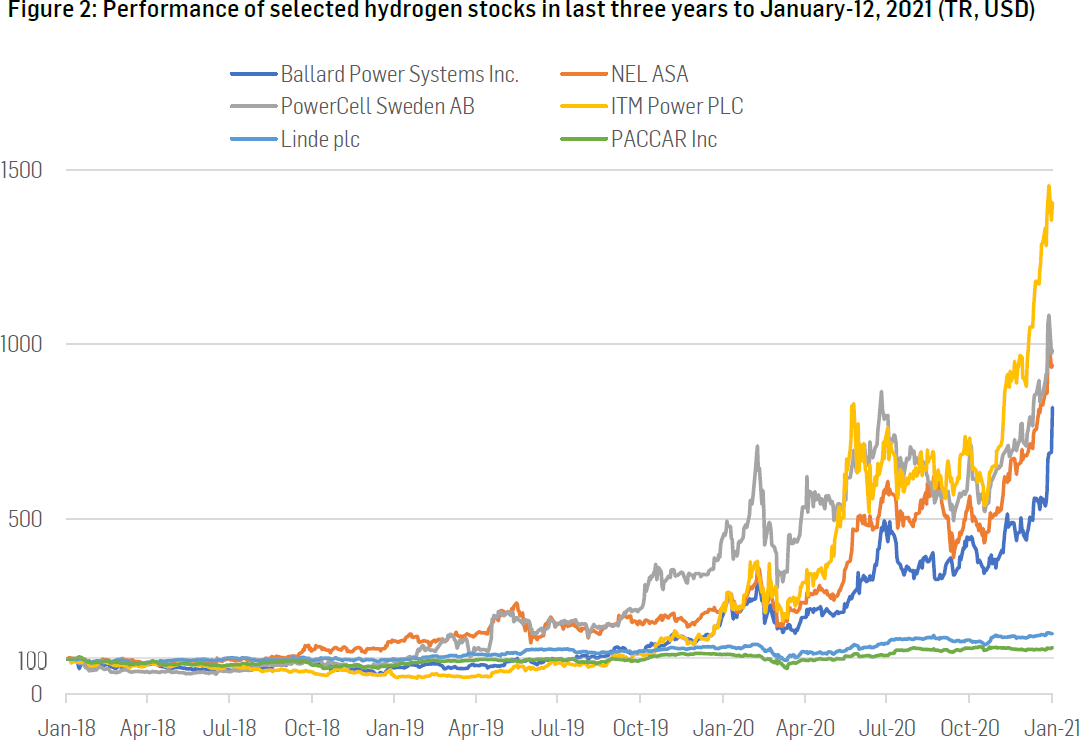 The hydrogen economy is a prime example of the combination of developments towards eco-friendly energy solutions and technological advancements. The recent developments around hydrogen, announcements regarding subsidies and governmental support, as well as forecasts of an increase in hydrogen production over the next decade are placing the industry at a tipping point. If costs to produce green hydrogen come further down, and if the technologies of use cases enable a wide-spread use of the greenest energy carrier, the companies in our Solactive Hydrogen Index Universe could have a bright future ahead. Capital market participants already seem to be convinced, given the recent outstanding performance of hydrogen stocks.